With the advent of new high-temperature high-quality dry-steam, a number of enhanced designs and energy-efficient process-applications have recently become possible.

MHI steam generators are designed for low to high variable steam production to the highest temperatures.

Chemical and Fuel Production Applications:  Many steam reactions are beneficial for energy production and biomass.  Super-heated steam offers high kinetics and clean chemistry for waste-to-fuel discrete community fuel production.   Consider the OAB-4-750 or GOAB-12-800 or the OAB-36 or GHGA.   Plastics are hydrocarbons that are made from petroleum, and they can be converted back to liquid fuel. For example, pyrolysis could be used to do this.  When subjected to the high heat and pressure, water breaks down the plastic and converts it into oil.   An  attractive method of converting these waste materials to useful form is anaerobic digestion with steam heating which gives biogas that can be used as a fuel.   Waste can also be converted to methanol and ethanol.  Garbage can be converted with plasma impact to break down organic materials into syngas, a mixture of hydrogen and carbon monoxide.  Organic waste via the  Fischer-Tropsch  reaction can be converted into Fuel.  A mixture of hydrogen and carbon monoxide – from municipal solid waste and other renewable biomass, can be converted to long-chain hydrocarbon molecules that make up diesel and jet fuels.  Some of these reactions are discussed in https://mhi-inc.com/steam-applications/.

To help with the COVID-19 process we are encouraging our customers to consider  helping  front-line workers at hospitals, testing clinics and other health-care facilities in their fight against the coronavirus and the COVID-19 disease it causes with innovative uses of the steam products and Airtorch Products.  We have placed many such products in the ‘Sale’ section of the MHI web-store. 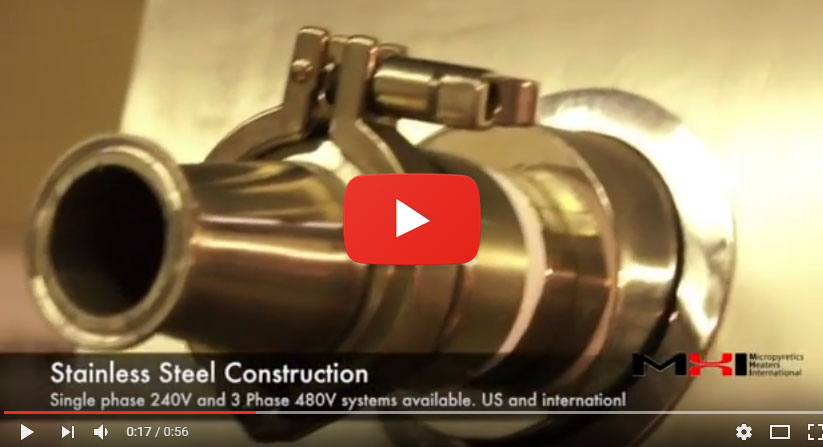 Antimicrobial Applications:  Dry high quality low-oxygen steam is a known antimicrobial agent that works without any organic residue.  The canning and bottling industry uses a considerable amount of steam. Use for aseptic processing.  The productivity increase with the availability of MightySteam™ – high temperature, dry and instant is a remarkable condition for steam – particularly useful for cleaning and soil remediation uses. Please click for steam anti-microbial  tutorials and published studies.

Heating Applications:  Steam offers heat transfer coefficients that are very high. The heat-content is also very high.  Steam dries faster than air above the inversion point. Use one of these generators.

Penetration: Steam as it condenses, continues to wick.  Use one of these generators.

Additive:  Add to Gas or Plasma Streams. Use one of these generators.

The heat-content is  very high.

Steam dries faster than air above the inversion point. Use one of these generators.

Steam is Antimicrobial (Bacteria, Fungus or Viruses) depending on the temperature and residence time.  Click here.

Bring your designs to life with beautiful colors and creative shapes. Become a high quality-steam user.

Why use an autoclave if your need is actually high temperature steam?  Creating pressure and releasing pressure is a huge waste of energy.

Calculate the energy used in pressurization/vacuum and compare with the OAB® and HGA steam.   Compare the foot-print of traditional steam boilers with with the OAB® ?

or Industrial Size but so much more compact than a boiler.

Commonly Asked Question:  Does one need high pressures or vacuum for steam to penetrate textiles or cloth packs? Answer: Most often no – provided the steam is super-heated adequately.

Steam self-propels as a gas.   Use this unlimited capacity of propagation from continuous steam generators. 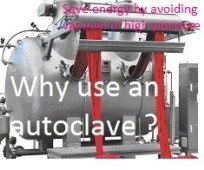 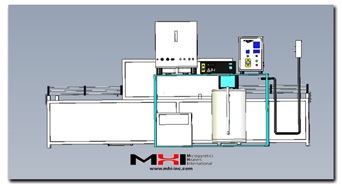 ~90% energy and water conservation, even for the most complex-shape glass bottles.

For a more detailed answer……please inquire here for pack penetration. 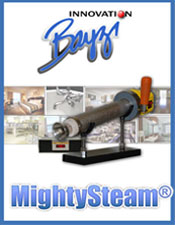 What is anti-microbial cleaning? 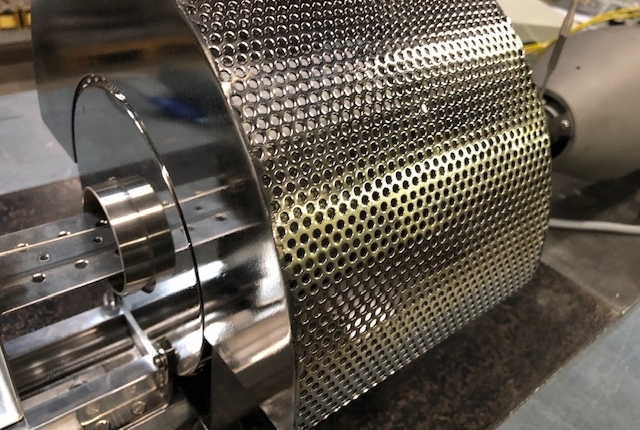 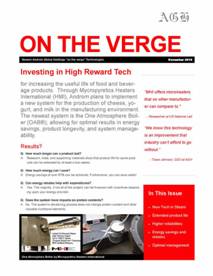 Innovate, take the smart risk to save energy.

Want to find out how MHI can help you meet your steam needs?

Please fill out a quick questionnaire by clicking on the product of interest.

We will help find a good solution to meet your needs. 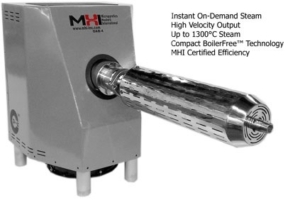 Steam For Fuel From Waste

Pyrolysis: This is also a thermal process similar to gasification above which involves the thermal degradation of organic waste in the absence of free oxygen to produce combustible gases.  Pyrolysis uses heat to break down organic materials in the absence of oxygen e.g with steam heating to 1250C. Materials suitable for pyrolysis processing include coal, animal and human waste, food scraps, paper, cardboard, plastics and rubber.  The pyrolytic process produces oil which can be used as a synthetic bio-diesel fuel or refined to produce other useful products.  Sometimes the  byproduct of pyrolysis is a kind of fine-grained bio-charcoal called “biochar”, which retains most of the carbon and nutrients contained in biomass so can be used as a soil enhancement to increase soil productivity.  During Pyrolisis volatile gases are released from a dry biomass at temperatures ranging up to about 700C. These gases are non-condensable vapors such as CH4, CO, CO2 and H2, and condensable-vapor of tar at the ambient temperature.   Cellulose can break down into Char, H2O, CO2 and methane.

Combustion: Use the Airtorch+Steam combination for a clean most common and well-proven thermal process using a wide variety of waste fuels. Municipal and household waste is directly combusted in large waste to energy incinerators as a fuel with minimal processing known as mass burning.  Combustion can be with a solid, liqid or gas reactant with oxidation. The Boudouard reaction (solid combustion) is stable above 700C to eliminate CO2 because  CO2(g) + C = 2CO(g).  Above 700C one can use CO(g) as a reductant for oxides as is done for iron oxide reduction. Link to MHI Fluidized Bed Designs.

Digestion: Landfills are  the primary method of disposal of municipal solid waste and if left undisturbed, landfill waste produces significant amounts of gaseous byproducts, consisting mainly of carbon dioxide and combustible methane (CH4).   This landfill gas or bio-gas is produced by the (oxygen-free) anaerobic  digestion of organic matter.  Treatment by steam is often recommended for elimination of certain harmful bacteria.  Anaerobic digestion to produce bio-gas can either occur naturally producing a landfill gas, or inside a controlled environment like a biogas digester. A digester is a warmed, sealed, airless container where bacteria ferment an organic material such as liquid and semi-solid slurries, animal wastes and manures in oxygen-free conditions for bio-gas.  An advantage of anaerobic digestion for converting waste to energy fuel is that it employs  semi-solid or wet waste.  This is normally a small scale operation.  The bio-gas produced can be burned in a conventional gas boiler to produce heat or as fuel in a gas engine to generate electricity or fuel some of the farm vehicles.

Fermentation: Fermentation uses various microorganisms and yeasts to produce liquid ethanol, a type of alcohol, from biomass and bio-waste materials. The conversion of waste to energy by fermentation requires a series of chemical reactions to produce the ethanol bio-fuel.  Here steam can be directly introduced for rapid kinetics.  Multiple reactions occur.  The first reaction is called hydrolysis, which converts organic materials into sugars. The sugars can then be fermented (similar to making alcohol) to make dilute ethanol, which is then further distilled to produce a bio-fuel  ethanol.

It appears that the worst greenhouse gases methane can be converted to non-greenhouse gases CO and H2.  These reducing gases can be used for reducing some metal oxides. So either the OAB or Airtorch may be used.  At this point catalysts become become important.

Note that several gases can be toxic and only professional involvement is recommended.

What is MHI working on to help with global warming apart from its standard proven approaches?  Did you know MHI shares data openly when it is of public interest- of course only whenever it is free to share?   Please support us by purchasing MHI products.

Interesting methods below  – hint – look carefully at the reactions.

Futuristic reactions.  These are discussed only with MHI high value existing partners. License possibilities to technology and trademarks. Contact MHI

Greenhouse gas CO2 can be converted to types of alcohols.

Waste to Fuel reactions can also be considered.

Waste to Fuel reactions can also be considered and there is a push to make liquid fuels by using a multitude of reactions.  The entire focus of these types of reactions has changed because of the CO2 and CH4 green house problems.  Ask MHI about simulated photosynthesis and flavor reactions.  Click for sample nano-catalyst coupons. 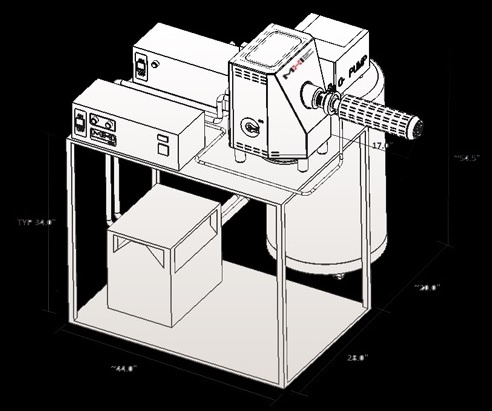 Waste to Fuel with MHI Products 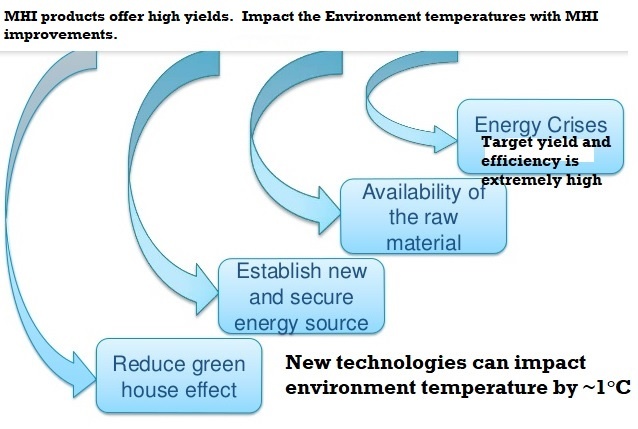 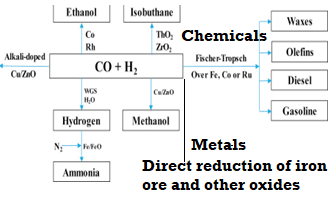 Use of Syngas – tunable manufacture with MHI Products.

Touch-up steam – 1Kg/hr of steam up to 400°C. Use for steam spray purposes only.

Assumptions include 1 kWhr costs 10 US cents. Continuous use for the year.

Steam-jet cleaning of glassware such as glass-vials with 550°C superheated high quality steam. Results from https://bayzi.com/ohio-state-presentation are only guidelines for biofilm elimination- please verify directly.

Please link to video if your browser does not support the video. 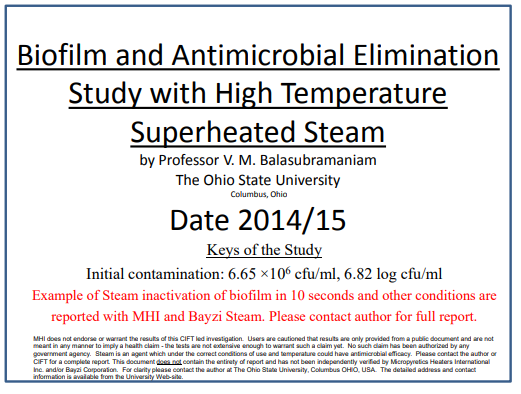